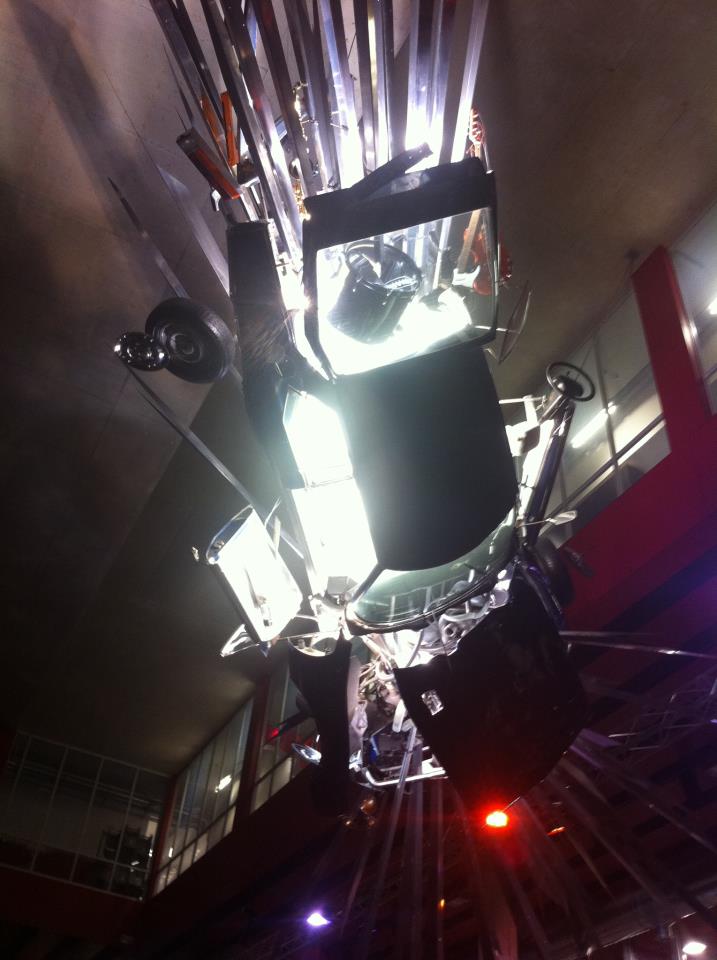 When I fell in love with Florence + the Machine, they were scheduled for a concert in Antwerp, Belgium, but it was already sold out. Surfing the World Wide Web, my eyes roll in my head like a casino slot machine when I find out that there are tickets on sale for their concert in Luxembourg, just around the corner. Crazed with enthusiasm, I contact my other band freak, Roxana. Two email exchanges and we have a deal. The group was performing on Wednesday, November 28th, and she was joining me from Romania for a Jason Mraz concert the day after anyway. It was in the cards.

But God works in mysterious ways. And probably that day when we went to Luxembourg He just wanted to be entertained and picked us for the job. For me, he booked one hell of a week. On Monday I took off at 6 a.m. with my team to Sweden for an intensive two-day team building, at the end of which I was just dreaming to get some sleep. And while I was making myself ridiculous doing traditional Swedish dances triggered by good wine, Roxana was quietly waiting for me in my apartment in Brussels. Having failed to synchronise due to my departure, I hadn’t seen her before I left but managed to pass her the keys to my apartment via a common friend.

I landed back in Brussels on Wednesday morning, after a short night’s sleep brutally interrupted by my 4 a.m. phone alarm clock. At eightyish we were back in the office. The concert is in Luxembourg at 8 p.m. and there’s no snow in view. It should take us 3, max 3.30 hours to get to the hotel which Rox kindly booked five minutes away on foot from the concert place, I say to myself. So I go home to collect my friend and hit the road. I’m a bit delayed on my way, however, because as soon as I take the main road I am stopped by the Police for having a dead headlight. I know, that’s one of the reasons my car failed the technical inspection, officer!

I am released and I finally get to my place. Rox is there, and she came with plenty of goodies from my other country. Happy times. We fuel up and start the journey.

Apart from having a dysfunctional left headlight, my car also has a faulty heating system, in that it does not work. At all. So that by the time we reached Luxembourg, we were barely able to articulate, we lost contact with our toes, and my hand was somehow glued on the gear stick. But hey, we could have run out of gas somewhere on the highway between two gas stations! So we see the positive sight of being only five minutes away from the concert hall, we park, get the room and get some booze to warm up. After all, we are on holiday.

Two bottles of whatever alcoholic beverage later, we dress up for the concert. We walk at a slow pace; we’re not too far, anyway. Ten minutes to 8 p.m. we’re in front of den Atelier, the music club hosting Flo and her machine. But surprise, shock, bewilderment: the courtyard is empty and all the lights in and outside the building are off. We check the street and the number; it still looks like we are in the right place. “They cancelled,” screams Rox, “they must have cancelled!” But when we examine the black-and-white printed tickets, we see the very small, barely legible letters of a second address taking shape in the upper corner of the paper. We started to doubt that we were in the right place.

We then take to plan B. Which is: get to this presumably correct address as soon as possible. Rox is a freaking walking and talking satellite, and is armed day and night with a fully working GPS, so she immediately checks the location. CIA would be jealous. “The good news”, says the intelligence agent undercover “is that we are not too far: 20 minutes by car.” The bad news, I think, is that I had a drink. If I am as lucky as in the morning and am halted by the Police again, this might become an extra problem, considering that my car did not succeed the technical inspection. But, anyway, we were so close and Rox and I are not exactly the type of persons who are easily discouraged. So we take the car, I stop on the bus lane because it just happens to be in front of our hotel and because Rox needs to pick up my driver licence to give us a sense that we were somehow behaving responsibly.

So I speed up to this new place, hoping to catch at least a small part of this concert that we made a long way to see. Rox is directing me, iPhone in hand. We arrive in a place where cars are parked on the sidewalk. This must be the concert hall. Rox is so high-spirited she could actually jump out of the car as I drive at full speed. “We can leave it here,“ she voices her enthusiasm, showing me a side of the road that could have been a good parking place, had it not been blocked by a big monolith. “We can move the stone,” she goes on, now clearly eager to jump. Looking at the size of that stone, I decided to drive around some more. Rox did her best to persuade me to park in some other illegal places, too, but I remained resolute: after all, we could use the car as a means of transport to go back as well. We finally found a real three-store parking, but since there were only 20 empty spaces left, it took us a while before we finally found one.

We run out of there looking backwards, trying to memorise our geographical position. We follow the crowd into a big building and when we ask about the concert, we are amazed to find out that Florence + the Machine will only start their show in one hour. What the hell was on our tickets?

We split to queue up for beers and pizzas. We now finally relax and look around: we are at Rockhal in Esch-sur-Alzette, in southern Luxembourg, a nice place looking like a hangar that could hold an impressive number of people. We head towards the stage, ready for the concert, and the lights go dim. The crowd starts to cheer, possessed by the excitement that precedes a major concert. We are left in complete darkness, colourful lights start to play around us, and then the intro…Florence and the Machine take the stage in a storm of applause and shouts. “She is not from this planet,” says Rox. Indeed, Florence Welch is not an earthly creature, at least she does not sound like one. It was a great night. Mission accomplished!

Later on we were to realize that the accurate address was highlighted in red letters on the original tickets. Having printed them in black and white only, this turned out slightly difficult for us to detect.