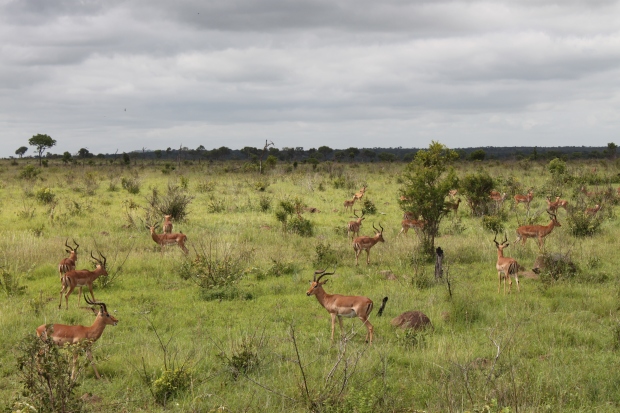 Excitement reaches its climax when we approach the Kruger National Park: this is what we expect to be the highlight of our trip. The moment to finally see the Big Five has come.

At the gates, right before the entry, we run towards the toilets – an opportunity we never miss whenever we are able to get out of the truck. We are a happy herd that is difficult to gather, so Takalani steps in: “Hé, guys”, he begins, as always, “Let’s go! The animal wait for no man.” I feel like I’m driven through South African bushes by Bob Marley resurrected.

He starts the engine and ships us to the adventure of a lifetime. We take the windows by assault, keeping the cameras ready to shoot, our eyes wrinkled by the effort to detect signs of wildlife. From the front of the truck, Takalani is launching books about spiders, scorpions, etc. We’re crazed, not knowing what to look at first. We are five-year-olds in adults’ skin.

Takalani is in high spirits. He brakes every 2 minutes, putting our balance to a test. He needs to drive very slowly, since the speed is limited in the park. After some long kilometres of bushes and a spectacular number of additional bushes of all possible sizes, we grow sleepy and let our guard and cameras down. Only impalas seem to populate the park. They are quite all right, but we’ve probably seen one to many. We moan at Takalani (whom some still call Takalini) that there are probably no big animals anyway and the whole Kruger is just one big impala reserve, a big scam for tourists.

Takalani knows how to pay his dues. He brings the giant truck to a standstill. “Hé, guys,“ he prepares the ground to break some important news to us. “Eh, this is impala.” By that time, we have counted close to 1.000 impalas, so our facial muscles refuse to show any emotional unrest. Our eyeballs grow bigger and our eyelashes beat the air in silence, waiting for the next info. “Eh, take a picture: it’s the only one that you will take today!” And he drives on, laughing, while we are all up in arms.

This was merely the beginning: the deeper we moved into the park, the less we believed that our chances to see the tail of an elephant would ever come alive. But Takalani is there to entertain us in our hopelessness. “Eh, can you see the green bush?” His question sounded as if he had spotted THE green bush that had something much more special than the other tens of thousands shaping the landscape that day. We just could not establish which one it was. “Up the hill,” he adds one more detail to make it all crystal clear: we could not see a damn thing in the distance. “There might be a rhino behind it”. Some of us zoom like mad, the eyes lost in the camera screen, looking for a small dot that might even remotely give the illusion of a rhinoceros. Plenty of dots to figure out, but none of them is moving, unless hallucination kicks-in from staring at them for too long.

“Yes,” our traveller from Germany confirms her identity.

“Do you see anything?”

“Fantastic!” (This, we realize, is Takalani’s most beloved idiom number two, slightly behind the “Hakuna Matata”). “I’ll take you closer, so you can see it better!”

To make our blood boil some more, he would also stop every now and then in places where there was absolutely nothing to see, not even an impala.

“Takalani, why are we stopping?”

Knowing that the park was five times the size of Belgium, we were looking at a long road ahead, trapped within the metal mobile framework that a very funny man was steering. We did end up seeing elephants (one of them almost got mad at the truck: a female protecting her babies), monkeys, buffalos, giraffes, hippos, kudus and some more impalas. 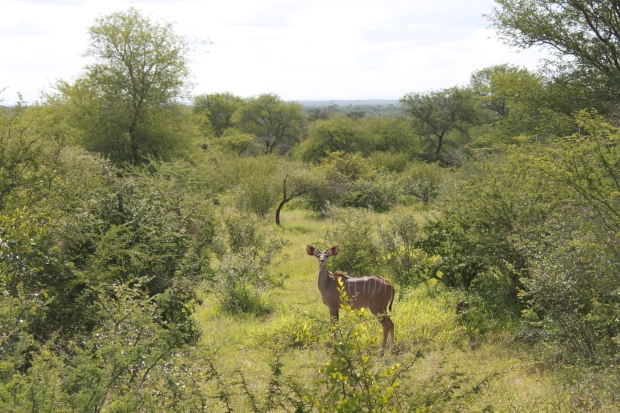 When we arrived at the campsite, Takalani fetched us the best spaghetti one could find in the neighbourhood on the truck’s gas cooker. South Africa was teaching us how to appreciate basic things in life: wireless-free days and electricity-free nights, plain pasta with red sauce, sandwiches and instant coffee. By day four, we were starting to free ourselves from the conventions of our comfortable life at home.

Takalani kept on challenging us: the next day we get up at 5 a.m. along with the very first rays of sun. Caffeine is desperately needed, but hot coffee in a metal cup is hard to drink in the few minutes we have left till we hit the road again. Thinking that the Kruger does not exactly abound in gas stations, I sigh in resignation, jump in our overland truck and follow Takalani’s advice to “sit back and relax” and enjoy the ride. 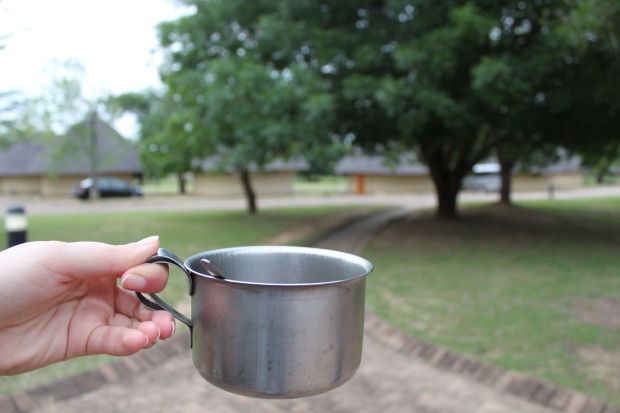 My Tweets
Follow Explorer of the Everyday on WordPress.com