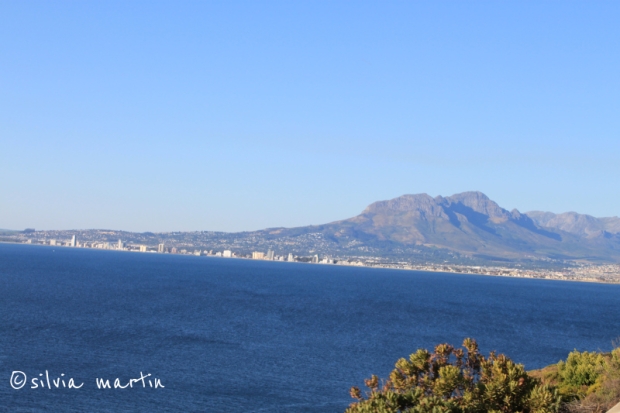 I saw “Searching for Sugar Man” some six months after I came back from South Africa. I did not realize how much the place had stayed with me until the opening scene of the documentary plunged me back on the same road that I was now taking to Cape Town with the Drifters. I remembered the excitement which took over all of us at seeing Cape Town from afar.

Considered to be one of the 10 must-see cities in the world according to Lonely Planet 2014, Cape Town has such a variety of visiting sites and activities to offer that spending only three days there felt like what Al Pacino was referring to as “the goof of all time” in “The Devil’s Advocate”: “Look but don’t touch. Touch, but don’t taste. Taste, but don’t swallow.” We knew for sure that the following days would leave us drooling over everything we would not have had the chance to experience.

No hurry to get to the city center though. The road from which Cape Town looked like a white line drawn between the ocean and the sky was an ecstatic experience in itself: on the left side of the truck, the rays of sun were sparkling in the blue and green water of the Atlantic; on the right side, huge rocks were reaching towards the light-blue sky. We might as well have been transported on a magic, though bumpy carpet. It felt strangely close to flying. 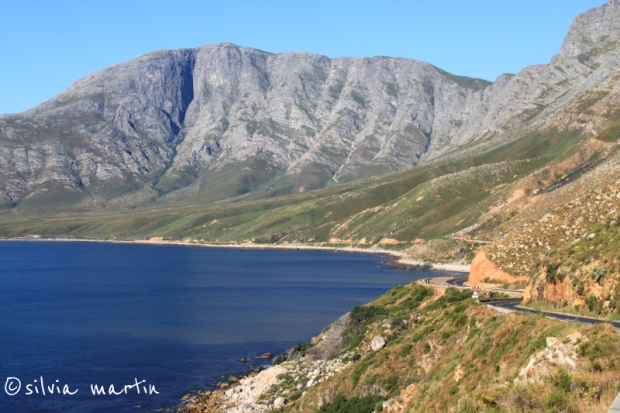 Lovers, passers-by have drawn hearts or written their names with black marker on the stones that border the side of the road. It is an unexpected sight. Maybe they, too, caught in the beauty of the place, set their minds on returning someday to look for lost traces.

Cape Town, contrastively, has the vibe of a city that moves into the future, as we were to see later on. When we arrive at Sea Point, we only have time for a very quick shower, an absolute must for everyone’s sake. The road had been long and we had all been generously stewing in the overheated army truck. It’s summer in December in South Africa. We rush out and take calculated turns to shower so as to be ready at the appointed time. One of the best things about organized group tours is that the schedule must be relatively respected by everyone. We rarely end up waiting for someone and never for too long. 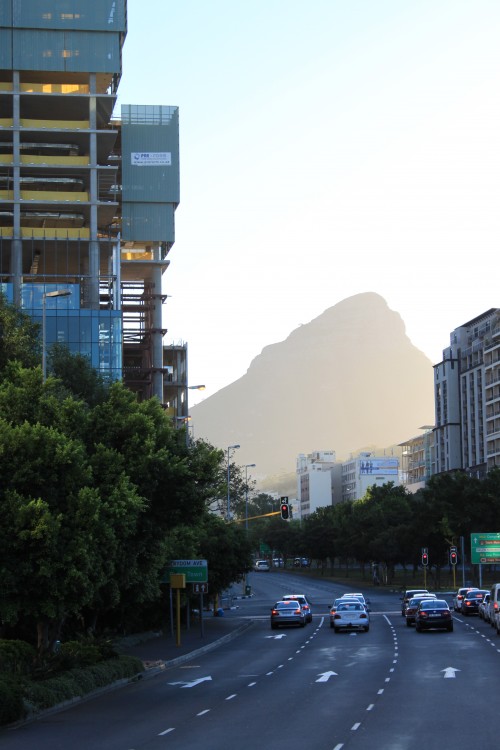 The drawback, however, is that you are equally dependent on the group to some extent, which largely diminishes freedom of movement, but does not incapacitate it. Just in case the thought might have slipped anyone’s mind, we are set into the touristic context and are brought to the notorious (I believe, since South Africans tend to do the “Aaaa” sound when I mention it) restaurant “Mama Africa”. We take several taxis to get there. I quickly befriend the black taxi driver: he speaks French and has already been to Belgium. He leaves me his card in case I might need a ride later. He does not like Cape Town and had been trying to get out of there for seven years. I am on holiday, so for me all is pinkish, even in the darkness of the streets on which he’s driving us. Being a tourist is a privileged position.

My first memory of “Mama Africa” is the live music and the truly exceptional singer animating the evening. The drums were loud and the singer’s voice was powerful enough to crack the walls. Maybe it had. He was not using a microphone (or else we might have gone deaf) and was waving his arms around freely, making up his own show. I bet he could have been hired by any European opera; I have never heard anything like it before. His notes were absolutely hair-raising – my indicator that something is close to perfection. The food was good but the show was even better. All the more so since Takalani, manifestly sensitive to the African beat, started to dance, joining the group of entertainers. It was a great night.

I did not realize that half of the group was already gone, so much was I enjoying myself, when I saw Janos’s panic so clearly disturbing his face expression and heard him say: “Where’s everyone? Where did Takalani go? How do we go back?” He was losing it. Takalani was in fact gradually sending back part of the herd by taxis, and he did so discretely with those who had finished and paid for their meals. I was lost to the African music and did not realize he was calling it a night. Until Janos’s face called for immediate attention: there was “emergency” written all over it, red light and everything. While I was happily relaxed and would have gladly been ready to discover a local night club or any other less touristy location, Janos was scared to be left behind in the big wild city of Cape Town at night.

I start to laugh, enjoying this unexpected reaction which catapults me to the opposite pole, making me look naively trustful all of a sudden. “Hey, it’s all good, even if they go away, we can stay longer. I have the number of a taxi driver, he seemed all right and he’ll drive us to the B&B.” The moment creates an opening for me to make fun of Janos for the rest of our days in South Africa and my guess is that he was grateful that the trip was coming to an end.

When we entered the Drifters B&B’s courtyard at Sea Point it was 10 p.m. The Germans were out having beer around the table, while the others disappeared in their rooms. I was among the last ones to be transferred from the restaurant. In that pleasurable warm breeze, livened up by the holiday mood and the excitement of a place I had not yet had the chance to explore, neither the courtyard, nor the room loomed appealing to me. Our B&B was just one minute away from the main ocean promenade. I ask if anyone wanted to have a walk but all I get back is dumbfounded looks as if my question had some sort of perverted indecency about it.

That was enough for me to grab my camera, wish my companions a very nice evening and go towards the secured gate beyond which my freedom was waiting. Groans and words of discouragement, like I was about to jump off a cliff. Before I leave the scene, Dieter, 50 something and some experience of how to enjoy life, volunteers to accompany me. Janos is suddenly encouraged by our joint suicidal impulse and decides to come with us after all. I feared that the stress would cause him to talk even more and probably faster, if such a thing was even possible.

Few things are as magic as being by the side of the Ocean on a warm summer night. We had ice-creams and walked the streets until we found a local bar and had beers. People were very friendly and smiled to us – Janos let his guard down.

“I actually think that Cape Town is a rather safe place. I feel safe here. I’ve been in other European cities and it didn’t feel as safe as here, “ he says. Dieter and I exchange looks. Subsequent burst of laughter, of course.

We were the only ones in our group to have experienced a tiny little bit of Sea Point, Cape Town by night. After having been in the wilderness, it is the human jungle that was putting my travel mates’ touristic zeal to a test. Ever since, people’s choices of destinations and the complexity of travelling as a social behaviour have been fascinating me. Like Rodriguez, I wonder. It took some of us as much as 19 hours flight to go back to places we call home. Table Mountain’s next.