Galati by the Danube – courtesy of Wikipedia

I grew up in a concrete environment. During communist Romania, blocks of flats emerged from the ground and spread across cities like mushrooms after a fresh rain, with no architectural purpose other than squeezing people in. Glued one next to the other and separated by thin walls, we could hear our neighbours putting a glass on the table. Because some families had been forcedly relocated from the countryside to the cities, they brought along their rabbits and hens and kept them on the balconies. Being woken up by a rooster was not such uncommon business.

To pass the time, we, kids of the blocks, would take care of the kittens and puppies that were systematically taken away from their mothers and thrown by well-intentioned neighbours in the huge collective garbage bins. Yes, Romania has a big collection of stray dogs and cats. These were the most exotic animals we had, and we bathed them and fed them in our apartments while our parents were our for work, named them, buried them and cried for weeks when they eventually died from poisoning or smashed by a car, as it was often the case. 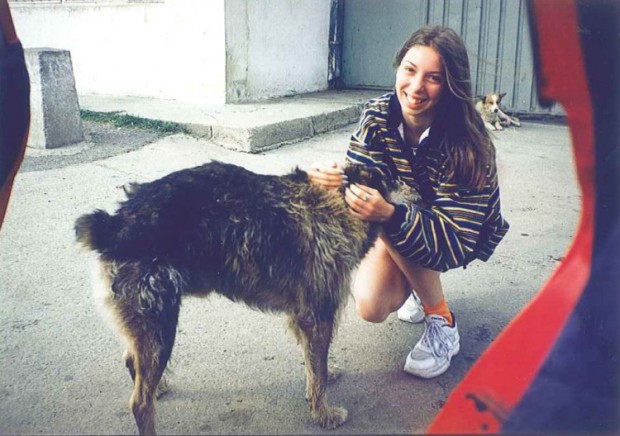 Instead of having a playground, my generation played hide and seek among garages. We also discovered that the concrete was actually perfect for rollerblading: Romania thus gave rise to a generation of rollerbladers. All day every day during holidays we would skate along the Danube border (on the uneven asphalt of what we called ‘Faleza’). Chunks of it were close to collapsing into the water, making the ride all the more exciting.

Part of the holiday fun was robbing the few communal trees of their fruits. We used to think they were everybody’s trees because no one truly owned the small patches of land in front of the blocks where they were growing. Still, some people took possession resolutely, as often in life, considering that if they were occupying a flat on the ground floor and the patch was right in front of their window, it had to be theirs.

And they put a fence, and so did all the other inhabitants of other ground floors who had a window to the land. Some planted a tree or the tree might have been there before and all of a sudden the fence proved it belonged to someone. The improvised “land owners” sometimes even started cultivating vegetables and so whenever we accidentally dropped a ball in “their” courtyard, the item was either confiscated or claimed back with a lot of struggle and tough negotiation.

I didn’t have any relatives at the countryside like most of my friends. So when the city trees had ripe fruits, I was curious to climb and do the picking. I would then eat the fruits dirty and dusty as I found them, something which, had my mum known, would have caused her a panic attack. I was never convinced that I was committing the act of stealing, since the tree itself might have been confused as to the identity of its owner.

Since apart from rollerblading and fruit picking there was not much for the kids to do in my hometown Galati, we also took to playing tennis or rather squash. Most of the times, this meant banging a ball against the block’s wall. A wall behind which there was usually a family life trying to go on quietly. Not once were we cursed, chased, thrown water or tomatoes at for making noise and instructed metaphorically to go somewhere else. Which we did. To practise the same activity on walls that were a bit further down the alley, where people were not our direct neighbours.

Or else we were spending whole summers just gathered around a small camping table and playing cards. We were quite a number so we constantly swapped teams: the winners would sit down and continue to play with the new team and so on. I remember that once someone threw such a big plastic bag filled with water that it bent the wooden table that was positioned between me and my best friend quite badly when it landed. Water splashed on our faces with sudden violence and we remained blank faced, cards in the hand and just looking into each other’s eyes for long seconds, incredulous at to what had just happened. Then we laughed, of course. Analysing the damages thereafter, we concluded that, had that huge bag, most likely thrown from the 3rd floor, landed on one of our lovely heads, we might not have finished college after all.

We did a lot of asphalt drawing in the kindergarten, too. That’s when my parents realized that they needed to orientate me towards something different than the arts. We also did rope skipping. But my all-time favourite “game” was throwing myself from the block’s stairs onto the bars on which carpets were normally dashed. I was getting quite good at these improvised even bars. No wonder we have a country full of talented gymnasts. This went on daily until one of my neighbours spread Vaseline on the bars and I was forced to take up other sports. Try as I might (and I did), it is not easy to remove Vaseline from metal. My revenge was as cold as the water I threw on him one evening as he was going to work.

Yes, we were loud, we were eating sunflower seeds and we were spitting the husk on the ground and leaving hips of dirt wherever we camped. But there was hardly any entertainment for us in the concrete covered town we were living in. Those were the highlights of our holidays.

Maybe that’s why I have come to appreciate nature so much, that’s why I crave for boundless fields. At least no one tries to take possession of the trees that grow in the part of the city I now live in and put them behind fences. They bloom freely, defying the concrete that surrounds them.