Lisbon is destined to be a very lovable city. To begin with, it has an exquisite geographical position: it is the only European capital set along the Atlantic coast. Summer there lasts for about six months and the average temperature in the coldest months of winter is +/- 15°C. This alone won my heart completely. But there is so much more: this is a place with friendly people, mixed cultures, and delicious food at prices that do not give one a heart attack. Colourful in every way with lively neighbourhoods, large and airy boulevards contrasting with narrow streets and endless stairways, old and shabby and timidly modern, equally charming in the sunlight or at dusk, Lisbon can hardly disappoint.

The people of Lisbon are among the kindest I have ever met. Though I only spent four full days there, I don’t believe to be mistaken in making this contention. It is not the customary kind of polite kindness you get in all civilized places. People here do something more. That extra gesture that convinces me that I’m right. There’s something more genuine in their desire to help you out, they seem easier to reach. In Lisbon, you are definitely in a warm, welcoming city.

During the four days that I spent there I only ate fish and seafood variations for lunch and dinner. My relationship with the fish as a dish had always been sour: we’d come to this, the fish and I, because my father, the ultimate fish eating lover, would display a giant catch from the Danube on our kitchen table on Sundays and would prepare it for cooking by taking its bowels out. That could have almost turned me into a vegetarian. But you cannot walk the streets of Lisbon without eating fish: it smells and is devilishly good everywhere.

Please, by all means, do not avoid queuing up at the Pastéis de Belém and treating yourself with the famous custard tart – it is as tasty as the reputation goes and again, you will not have the feeling that you’ve been robbed. Another reason why I could live in this city is the pastelarias (pastry shops). You can find them anywhere and it’s always a rewarding stop. Don’t hesitate to ask for things that are not on display, like fruit salads. They will fetch one for you. As one waiter was saying to a customer: “You get what you want. Just say what you want.” This, I thought, summarizes pretty well what Lisbon is all about.

Now, if it’s cocaine that you want, look no further: you will be stopped and asked if you wish some in the city center. Though it took me a moment to realize I had arrived somewhere in Europe and not in a Brazilian favela, the situation is not as critical as it may seem when you have just landed, feel dirty, hungry and everyone else around you looks and actually is high. Give it some time, this is an aspect you will soon forget.

There is a myriad of things to see and do in the central area of Lisbon and I could not recommend one in particular, so make it a personal discovery. It is very easy to move around, be it by metro, sightseeing bus, train, tram, etc. But I find the city is best enjoyed on foot. Some streets have a serious inclination problem, so if you are allergic to walking, this is not the moment to be brave and give it a go. And ladies, spare yourself the trouble and do not put on high-heels: Lisbon’s cobblestones do not exactly offer catwalk quality, the streets go up and down in impossible angles (I wouldn’t drive there, let alone attempt parking) while the staircases are plentiful.

What I would advise, though, is a trip to Sintra. Just not the way I did it. Sintra is 40 minutes away by train and the ticket has the ridiculous price of 4€ for a two-way trip. Once in Sintra, have some mercy on your feet and take the bus that takes you to Palácio Nacional da Pena – an absolute must-see– or walk to the historic center and by God, do take a bus at least from there. Lost to the landscape and aerial as I was and having read absolutely nothing about the place other than that it was worth a detour, I thought I was heading for a leisure walk to the castle.

By the time I realized I was hiking up a mountain and that all the bus stops were exhausted, I had gone much too far to turn around. All in all, I walked up a steep slope trying to avoid being hit by cars for 5 long km and was a mess when I arrived at my destination. That the day was not going to get any better became even clearer when I was announced that I had to walk through a large park and further up before I reached my target: Palácio Nacional da Pena. In addition to that, I also managed to lose my way, for the park was big and lacked visible signage.

This made me ponder as to the origin of this palace’s name: was it called like this because it was such a pain (“pena” means “punishment” in Portuguese) to get to it or because it was worth seeing it (“que vale a pena” stands for “it’s worth it”)? When I found myself at its feet, I had to admit in a fraction of a second: yes, it was well worth the torture. It is, truth be told, beyond beautiful and I would have spent a full day there soaking up those unbelievable towers, each different in colour and shape, giving the palace the overall aspect of a superbly ornate cake. The view on Lisbon was quite mind-blowing, too. I did take the bus to go back.

Lisbon is one of the oldest European towns. Choose a viewpoint from where you can have a long and attentive look at the panorama of buildings: different sizes, shapes, colours, styles, spread out on unequal levels as they are. I would recommend watching at least one time the sun go down over the city from the Miradouro da Graça. And walk through the Alfama neighbourhood before or after: though finding your way easily in a town is a relief, it is also a pleasure to learn how to lose yourself and find your way back again. This is a good starting point for such matter.

Some other 40 km away from Lisbon is the thing that I, as a resident of a dark country, am generally longing for the most: not only the sun, but also the sand beach, all into one! Ok, the water is still cold, but when you’re lying on the beach of Carcavelos (much nicer than Cascais, I find), you’ve just had octopus for lunch and beer for less than 15 euros, there are no reasons to complain.

Still, there is one thing I would like to complain about: the wind. There’s a perpetual wind in Lisbon, which messed up my hair so much that it would have been more reasonable to cut it than try to comb it. It was the sort of wind that might work for the L’Oréal “Because I’m worth it” commercials, only I was worth it the whole day. Strangely enough, of what I noticed, the Portuguese seem to be much chilled and more patient than their much more agitated Latin cousins. Could it be that the strong Atlantic breeze had an influence on their temper and literally cooled them down?

All things considered, Lisbon and I almost didn’t happen. Two flights with two different air companies scheduled ten minutes one after the other, one moment of absent-mindedness and I was on the wrong line. I almost missed the flight. It was the first time that I embarked on a plane as the last passenger and the second time I ran as if my life depended on it.

A bridge, a tower, a palm tree, the blue of the distance. Lisbon seduced me, no doubt. It treated me well and sent me back with splendid memories. However, with the Portuguese flocking to countries such as Angola and Mozambique (and apparently there are big queues in front of the African embassies), Lisbon reminds us that perfection does not exist. That we can only get that close to it. Hopefully, we’ll meet again.

“We leave something of ourselves behind when we leave a place, we stay there, even though we go away. And there are things in us that we can find again only by going back there.” ― Pascal Mercier, Night Train to Lisbon 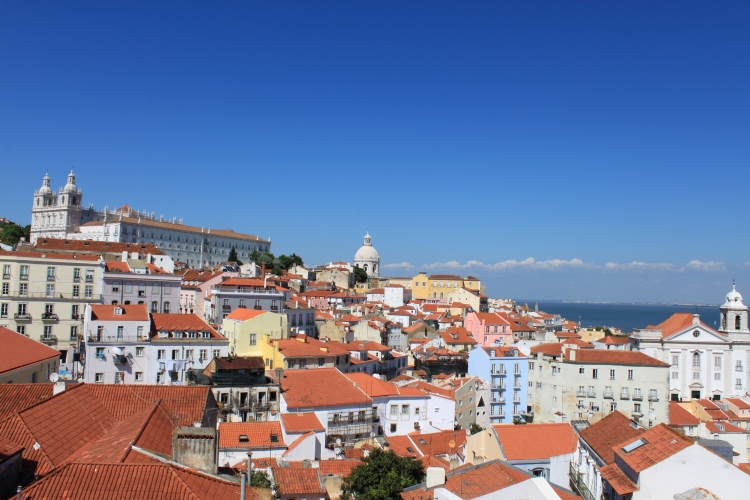 3 thoughts on “The Lisboa Experience”