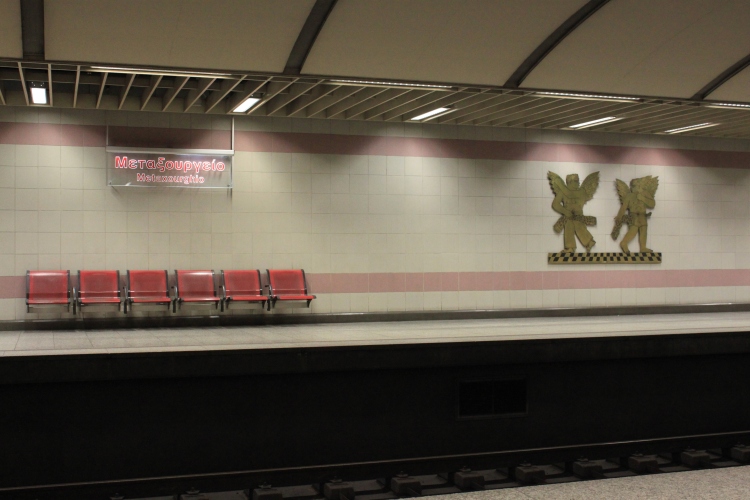 Coming back from Athens, Greece where I attended a TBEX travel bloggers’ event that gave me a fresh insight into the blogging world, I found myself lost and uninspired: what to blog about the city? The doubt was legitimate. I didn’t manage to see Athens. I only went to the Acropolis Museum and had a 2€ espresso with a view on the famous ruins and took a free ride on a hop-on and off bus, courtesy of City of Athens. The rest of the time was spent at the Megaron Athens International Conference Center, either in the conference rooms or in the hallway.

I did finish my journey with a short evening walk in the Acropolis area though, nostalgically retracing the steps of an eleven-year-old kid who was travelling for the first time abroad: me. I did not forget that my teacher had slapped me for having lost myself from the group, an act which I have ever since perfected through regular practice, especially when it comes to hiking on a mountain. The mythical atmosphere of the place must have distracted me to such an extent that I forgot to follow.

Years later, here I was again, jumping from one metro into the other to come and listen to the TBEX speakers , hoping to suck in all their knowledge just by being present. I wasn’t going to stay long in Athens, not enough so as to feel the pulse of the city and be able to blog about it. Writing about Athens didn’t seem realistic. And yet. When I arrived in Brussels, Belgium and had to take the metro back home, weary and sleepy as I was, I found my story angle.

Factually, Athens was for me an accumulation of underground travels this time. As a result, the metro became the only site in Athens that I could give some observation-based feedback on. As I was waiting for my metro connection in Brussels, it became clear as day that the metro stations in Athens were infinitely cleaner, nicer and overall friendlier by comparison. And by clean I mean spotless, which is easy to notice because they are built with white marble walls and granite floors. On the walls, small representations of gods and goddesses remind the travellers of where they are. In Athens, one of the oldest cities in the world, the myth is present, the legend is brand.

So what if the metro is so packed with passengers when it enters the station that some of them are glued face against the window? You’ll squeeze in, everybody does, eventually. The place is so neat it shines. There’s not one single trace of graffiti spray; eating, drinking and smoking in the stations are also forbidden. Some of them even have screens where you can watch the news while waiting. Let’s have a look at the price as well: a five-day ticket costs 10€. Now that’s affordable. And cherry on the top, in Athens the metros run until 2 am on Fridays and Saturdays.

The Brussels metro, on the contrary, welcomed me with a rat hole type of smell that put me off any desire to have breakfast and a general state of uncleanliness – a stain on its status as Europe’s capital city. At the conference in Athens I had a nice conversation with a representative from the Munich Airport about how airports are the business cards of their cities. They are, after all, the first stop on a traveller’s way to somewhere. And first impressions tend to be long-lasting.

The same goes for metros. After the airport, they are most likely what the visitors see next. Or the only thing they see at all, several times a day. Wouldn’t it be interesting, Brussels, to take Athens’ example and clean out a bit the mess that has established itself all too well in your underground world? I would like to come back from my travels to underdeveloped countries and be greeted by clear signs of civilisation, which can hardly be a reality as long as dirt is allowed to pile up with negligence. Shall I remind you that you’re hosting some of the most important European institutions and that it would be interesting to stand out as proud and presentable?

I felt like congratulating the City of Athens on this one. Crisis there may be, but the efforts to maintain a spotless and welcoming underground transportation system have not been affected and this is all to your credit. Next time I will spend more time on the upper level, too.

P.S. And while doing my research, I was pleased to discover that Frommer’s included Athens in the top ten cities with the best subways in the world: http://www.frommers.com/slideshows/818699-the-world-s-best-subways-10-top-cities#slide818700 Well done!

6 thoughts on “Metro ride in Athens”